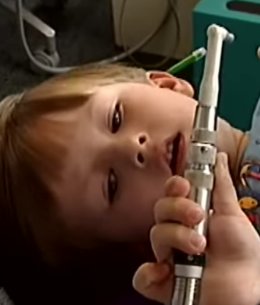 Dr. Pike: I started out doing things differently than what I do now.

It was much more of an authoritarian approach before because at the time that was the prevailing way of doing things, like “You better open up your mouth right now or you’re going to get in a lot of trouble.”

We would talk like that to kids and little by little, I realized that the kids that I tried to intimidate them into allowing me to fix their teeth – as they got older, some of them were afraid to go to the dentist.

And that’s when I knew that I had to start figuring out some non-frightening way of getting things done.

Parent: There’s the games and the gerbels and the toys. I’m telling you sometimes it is hard to leave.

I think I’ve had to take him out crying once because he didn’t want to leave. He was having way too much fun.

He just has a real ease about working with the children and it makes it flow, I guess.

Dr Pike: Madison just sets the mood. There’s something about the calming effect of a dog. It’s not a dentist’s office anymore.

Parent: This is a new age and so this is what our kids deserve.

Dr. Pike: Even though I’m a dentist and my primary focus should be teeth, I have to put the child first and their memory first and the teeth second.

As long as I do that and as long as I remember that, everything else follows just fine.